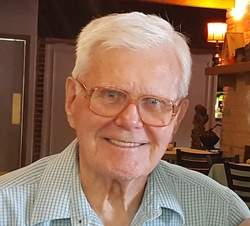 A funeral service will be held 11 AM Friday, June 9, 2017 at St. John’s Lutheran Church, 9193 Cleveland Avenue, Baroda, with the Rev. Wayne Shearier officiating. Friends may meet with the family from 5-7 PM on Thursday at the Boyd Chapel of Pike Funeral and Cremation Services, 9191 Red Arrow Hwy, Bridgman. Burial will be in Ruggles Cemetery, Baroda. Memorial contributions may be given to St. John’s Lutheran Church, PO Box 67, Baroda, MI 49101.

Leonard was born February 28, 1928 in St. Joseph the son of the late Herman and Anna (Zordel) Tollas. He served in the US Army, on June 10, 1950 he married the former Ileen Fritz. Leonard worked for Strefling Oil Company and Baroda Tire Center for 40 years. He was a member and past president of St. John’s Lutheran Church in Baroda. He was a past post commander of the Baroda American Legion Post 345. He was a member of the Baroda Fire Department and served as Fire Chief from 1970-77.

Leonard was also preceded in death by a granddaughter, Beth Tollas, and a brother, Alfred Tollas.

To order memorial trees or send flowers to the family in memory of Leonard Tollas, please visit our flower store.