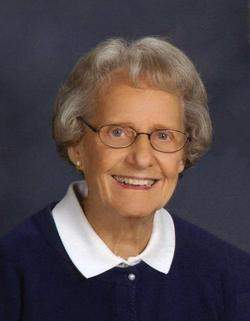 Born March 22, 1924, to Hans Peter and Gertrude Payberg in Chicago, Illinois, Lois Lorraine Payberg was born the third of four sisters. Her sisters and their husbands, Ruth (Clarence) Lundell, Pauline (Gordon) Areen, and Jeanne (Chester) Price, preceded her in death.

Lois began a career at the Harris Trust Savings Bank in Chicago and was promoted to executive secretary for Mr. Stanley Harris. In 1950 Lois married Arthur (Art) R. Hoffmann, and shortly thereafter moved to Harbert, Michigan, where she and Art raised three sons. Lois was a life-long member of the Harbert Community Church, where she was a dedicated member of their choir and a Sunday school teacher. Lois was a Cub Scout Den mother and volunteer in numerous capacities. She and Art were avid members of the Chikaming Country Club and active members of the Prairie Club at Camp Hazelhurst in Harbert. Lois was always ready to play a round of golf, a good hand of bridge, or go for a swim in Lake Michigan, but most of all she enjoyed with all her heart being with family and friends. Lois was a loving and generous mother, grandmother, and friend, who will be deeply missed.

Memorial contributions may be made to Harbert Community Church, PO Box 197, Harbert MI 49115 and a Memorial Service is being planned for this coming summer.

To order memorial trees or send flowers to the family in memory of Lois Hoffmann, please visit our flower store.