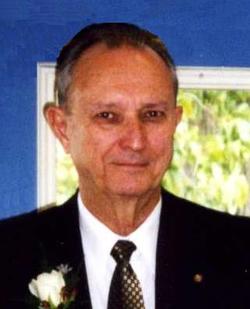 Funeral services will be held 11 AM Thursday, August 22, 2013 at Pike Funeral Home, Boyd Chapel, 9191 Red Arrow Highway, Bridgman with Reverend B. Gordon Barry officiating. Burial will be in Maple Grove Cemetery, Concord, Michigan. Friends may meet with the family Wednesday from 6-8 PM at the funeral home. As an expression of sympathy memorial contributions may be given to Berea College in Kentucky.

Carl was born on September 6, 1930, the son of Hugo and Charlotte (Vandenberg) Zienert in Pulaski Township, Michigan. Carl graduated from Jackson (MI) High School in 1949 and Western Michigan University with a Bachelor of Science in Business Administration in 1969. Carl married Sue Carol Marks on October 6, 1951. He enlisted in the United States Air Force in 1950 and he and Sue moved to Margate, England, where he was stationed at Manston RAF Base. He left the Air Force when his tour was over, but rejoined the Air National Guard later and graduated from navigator’s training. He loved to fly B57s with the Air National Guard unit in Battle Creek, MI. Carl retired as a Lieutenant Colonel from the Air National Guard after 28 years.

Carl worked in manufacturing throughout his career, working for General Foods, United Technologies, and his own company, Sawyer Products. He retired from United Technologies at age 67. Carl enjoyed woodworking, golf, gardening, flying, traveling and spending time with his family.