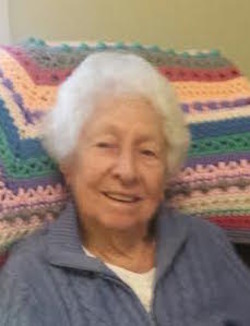 
Margaret Freehling, 98, of Glendora passed away on Thursday, May 25, 2017, at Lakeland Medical Center, St. Joseph.

Funeral services will be held at 11 a.m. Tuesday, May 30, 2017, at Trinity Evangelical Lutheran Church, Glendora, 1733 Glendora Road, Buchanan, with the Rev. Jonathan A. Liebich officiating. Burial will be in Weesaw Township Cemetery, Buchanan. Friends may meet with the family from 10-11 a.m. Tuesday at the church prior to the service. As an expression of sympathy, memorial contributions may be given to Trinity Evangelical Lutheran Church, 1733 W. Glendora Road, Buchanan MI 49107.

Margaret was born Oct. 28, 1918, in Three Oaks, the daughter of the late Conrad and Elizabeth (Roh) Sinner. On Oct. 8, 1938, she married Adam Freehling, and he preceded her in death in 1979. She was a faithful member of Trinity Evangelical Lutheran Church, Glendora.

To order memorial trees or send flowers to the family in memory of Margaret Freehling, please visit our flower store.
Send a Sympathy Card