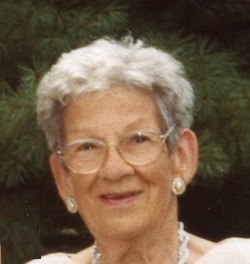 Margaret Kliemchen, 91, of Sawyer passed away Sunday, September 28, 2014 at West Woods of Bridgman.

A funeral service will be held 11 AM Thursday, October 2, 2014 at Trinity Evangelical Lutheran Church, 5791 Sawyer Road, Sawyer, MI, with Reverend Randy D. Lett officiating. Friends may meet with the family from 10 - 11 AM one hour prior to the service at the church. Burial will be at Riverside Cemetery in Three Oaks. Memorial contributions may be given to a charity of your choice.

Margaret was born February 2, 1923 in Muskegon, MI, the daughter of the late Paul and Christine (Kuklis) Kubicek. On August 30, 1939 Margaret married Henry C. Kliemchen and they shared 48 years together before his death on August 13, 1987.

Margaret was also preceded in death by seven brothers and sisters.


Memorial Donations Memorial donations can be made to:
Charity of your choice

To order memorial trees or send flowers to the family in memory of Margaret Kliemchen, please visit our flower store.