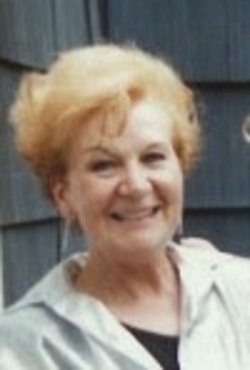 
Marilyn McKinley, well-known and respected in the St. Joseph community through her work at WSJM and her many volunteer activities, passed from this life on Sept. 28, 2014, surrounded by her devoted family. A celebration of her life will be held at noon Oct. 26, 2014, at the Weko Beach House, Bridgman.

Marilyn Adler was born June 8, 1926, and was raised near Silver Beach ... a "Sand Rabbit." And so began her lifelong love of Lake Michigan - her muse, her source of comfort and inspiration throughout her life.

In 1948, Michael S. McKinley, fresh out of the Navy and studying sociology at Notre Dame, saw her jitterbugging at a dance in Cassopolis, and it was love at first sight. On June 11, 1949, the two were married at St. Joseph Catholic Church. Soon came six children: Daniel, Maureen, Christine, Mary Kathryn and Paul; the sixth child, Michael C. McKinley, was born one month after his father's untimely death on April 23, 1957, at age 29. Her husband remained the love of Marilyn's life, and she raised their children with courage, faith, humor and unconditional love.

Marilyn will be most widely remembered in this community for her decades of work at WSJM radio, where she worked as a bookkeeper, copywriter and copy editor. She also covered local news and politics, as well as the annual Blossomtime events.

When her children left home, Marilyn bloomed as an artist whose beautiful, spiritual stories captured her reflections as she walked along the shores of her ever-changing lake.

Her parents, Charles and Christine; brothers, Carl and Robert (Nibby); and sister, Carol, preceded her in death.

Marilyn's family is grateful for the wonderful care that she received during her final years living at Woodland Terrace and for the extraordinary 12 days at the Hanson Hospice Center.

To order memorial trees or send flowers to the family in memory of Marilyn McKinley, please visit our flower store.