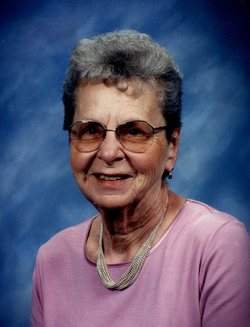 Funeral services will be held 11 AM Saturday, December 9, 2017 at Trinity Lutheran Church, 619 Market Street, St. Joseph, with Reverend Michael J. Roth officiating. Burial will be in New Troy Cemetery. Friends may meet with the family on Saturday at the church from 10 AM until the time of the service. As an expression of sympathy, memorial contributions may be given to Trinity Lutheran Church, St. Joseph.

Marjorie was born March 12, 1925 in Buchanan the daughter of the late Clarence and Eva (Barber) Huss. On June 27, 1942 she married Emil Stanley Strefling and he preceded her in death on Oct. 15, 2003. Marjorie and Emil owned a grocery store in Baroda, built homes for over 25 years, and she assisted her husband in their real estate office for over 50 years. She was a member of Trinity Lutheran Church of St. Joseph.

Marjorie was also preceded in death by a son, Ralph; a granddaughter, Nannette; a great granddaughter, Valeria; a son-in-law, Bernard Leonelli; a sister, Beverly Brockway; and two brothers, Floyd and Robert Huss.

To order memorial trees or send flowers to the family in memory of Marjorie Strefling, please visit our flower store.