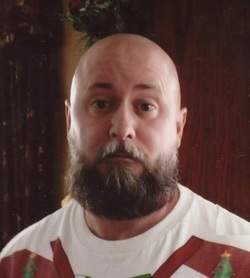 A visitation and gathering of family and friends will be from 5 - 7 PM Friday, December 5, 2014 at Pike Funeral Home, Boyd Chapel, 9191 Red Arrow Highway, Bridgman. Memorial contributions may be given to the American Heart Association, 3816 Paysphere Circle, Chicago, IL 60674.

Mark was born August 30, 1958 in South Bend, Indiana the son of Jack Lee and Linda Lee (Swem) Germinder, Sr. He worked for over 15 years at Corvette Central in Sawyer. It was Mark’s way to try and brighten everyone’s day with candy or one of his drawings. Every card he sent out had a personal touch with his Charlie Brown and Snoopy drawings. Mark put friends and family first. He will be remembered as a wonderful son, brother and uncle.

Mark was preceded in death by his father, Jack in 1999, his sister, Teresa Hrivnak in 2011, and a niece, Katie-Beth Hrivnak.

To order memorial trees or send flowers to the family in memory of Mark Germinder, please visit our flower store.