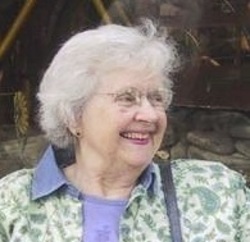 Mary Raney Begor, a devoted mother and teacher, passed away on Thursday, February 12, 2015 at Woodland Terrace in Bridgman.

Mary was born April 27, 1924 in Columbia, South Carolina, the daughter of the late Farley and Mary (Epes) Raney. Mary was raised in Lawrenceville, Virginia and a 1941 graduate of Newport News High School in Newport News, Virginia. In 1945 Mary earned a Bachelor of Science Degree in Mathematics from the College of William and Mary. After college she worked for the National Advisory Committee for Aeronautics (NACA) and married Roland Diggs Begor of Hampton, Virginia. She lived in Ohio, Virginia, the Philippine Islands, Georgia, Maryland, and Massachusetts. Mary taught high school math in Bowie, Maryland from 1966 through 1990, and particularly enjoyed teaching because she could “see the progress the students made over the course of the year.”

Mary was preceded in death by a granddaughter; Laura Begor.

To order memorial trees or send flowers to the family in memory of Mary Begor, please visit our flower store.
Send a Sympathy Card