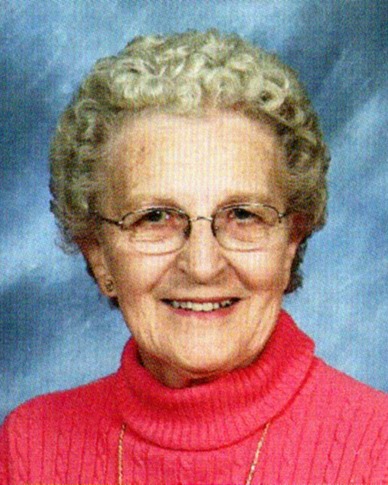 A funeral service will be held 11 AM Thursday, December 29, 2022 at Trinity Evangelical Lutheran Church,1733 W. Glendora Road, Buchanan. The family will receive friends from 10 – 11 AM Thursday at the church prior to the service. Burial will be in Weesaw Township Cemetery, Buchanan.  Memorial contributions may be given to Trinity Evangelical Lutheran Church, Glendora.  Online condolences accepted at www.PikeFH.com

Mary was born August 4, 1931 in Baroda, the daughter of the late Roland and Sylvia (Florian) McMillen.      Born during the height of the great depression, her dad worked numerous part time handyman-caretaker jobs just to earn food and shelter for his family, causing his family to move around a lot and Mary to attend different schools almost every year of her young life. She was joined at 4 years old by a sister, Joyce and at 10 years old by a brother, Warren. She attended elementary schools in the Baroda-Stevensville area as well as Hills School. Although Mary’s parents were not church goers, she always went to Sunday school and church through neighbors and friends in the Baroda area and Hills Corner Church. The family finally moved to a permanent home on Hills Road where Mary started high school at Buchanan and was able to ride to school with her dad who now had a steady job at Clark Equipment. During her young school years, she would spend summers earning money at neighborhood farms picking fruit and vegetables. Her last 3 years of high school were at New Troy where she graduated in 1949. It was during those years that she met the love of her life, Henry “Dick” Freehling. They actually first met at the Wolverine Gardens Corner across the street from Trinity frequenting the ice cream bar and softball field concession stand where Dick would play softball. They dated for two and a half years and were married on June 4, 1949 shortly after Mary graduated from New Troy High School. Mary became a confirmed member of Trinity just before their marriage. Together they began their lives as grain, fruit, vegetable and dairy farmers on their 40 acre farm on Holden Road where they raised their 4 sons, Henry Jr., George, Wayne, and Ronald and 1 daughter, Diana. Mary dedicated her life as a farm wife, mother, and to her Lord and Savior. Mary knew the importance of seeing her children attend Lutheran Day School and Sunday School. Mary was a Sunday School teacher at Trinity for many years, an active Ladies League member and always attended bible study. She would amaze people by her ability to recite Psalms and Scripture passages from memory.

She was a hard-working farm wife and had a daily routine of farm chores which she enjoyed and was good at. She would help with the daily milking sometimes carrying milk to the cooling tank before more modern methods were used. She loved to care for young calves especially the newborns where she was proud of her ability to keep them alive and healthy.

In 1976, after the family was grown and on their own, Dick and Mary moved to the main farm on Glendora Road where they continued with the dairy operation along with son George, until Dicks declining health prohibited it and his eventual passing in 2008. Mary continued living there until 2015 when her declining health made it necessary to live in assisted living. She continued her battle with dementia and in July of 2021 a severe stroke limited her ability to perform many daily functions till her passing in her sleep on December 23, 2022.

To order memorial trees or send flowers to the family in memory of Mary Rosette Freehling, please visit our flower store.