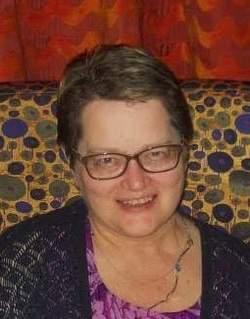 Mary Jo Nye, 60 of Battle Creek, MI, died unexpectedly in the shootings in Kalamazoo on Saturday, February 20, 2016. Her last day was spent with some of her closest friends, enjoying an outing at the theater, which was her joyful habit. She was with her friends Barbara, Dorothy “Judy,” and sister-in-law Mary; they were all tragically killed.

Mary Jo was born the sixth of seven children to Charles Manley and Joan (Cushing) Nye on August 14, 1955. She was raised on the family farm in Baroda where she learned how to cook and sew beautifully from her mother and grandmother.

Mary Jo was a graduate of Lakeshore High School, going on to Western Michigan University and Michigan State University, where she studied primary education. She spent her early career establishing an adult literacy program in Southwest Michigan and went on to be president of the Literacy Council of Calhoun County. She also worked with the Humane Society and The Haven of Rest of Battle Creek.

She went on to be one of the founding teachers of Calhoun Community High School, an alternative education high school in Battle Creek. While at CCHS, she helped and mentored countless students to achieve their high school diplomas and to be successful in their chosen pursuits.

After retirement, she spent her time traveling, seeing family and friends, and continuing to help students reach their goals. She also enjoyed being with friends Lynn Wagner, David and Nancy Pike. She was an avid quilter and skilled baker, who loved to teach others her craft. Throughout her life, she was an active member of the United Methodist Church, serving her community as a member of the Chapel Hill Methodist Church’s human resources committee.

Mary Jo was a vibrant, caring, quick-witted, generous, and fun-loving woman, who was—to use her own words—“everyone’s cheerleader.”

To order memorial trees or send flowers to the family in memory of Mary Nye, please visit our flower store.