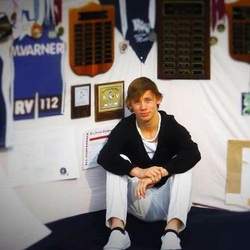 Mathew Barney Varner, 21, of Niles passed away tragically as the result of an automobile accident on Sunday, August 13, 2017.

A celebration of life will begin 4 PM, August 17, 2017 at the New Troy American Legion, Wee-Chik Post 518, 4789 Weechik Road, New Troy. Memorial contributions may given to the family to help with expenses.

Mathew was born September 3, 1995 in Tampa, Florida, the son of Eunice Jane Varner. Mat was a member of the New Troy American Legion and was a 2014 graduate of River Valley High School where is was a lightweight division wrestling champion with over 100 wins. He was employed at Vickers Engineering in New Troy and had recently been hired as the head wrestling coach for New Buffalo Senior High School. Mathew loved wrestling and teaching others as the director of MYWAY Wrestling.

Mat loved his family very much, his aunt Janice “Gigi” Mann, his brothers, Jonathan and Joshua and sister Angela, his uncle Cricket, and cousins Rick, Chelsea, Gage, Cali, Jagger and Zoey. His life definitely revolved around his best friends Danny, Hunter, and Jeffrey and many more! He loved his dog Stewie.

Mat was preceded in death by his mother, Eunice Iannone on March 29, 2010.


Memorial Donations Memorial donations can be made to:
the Family

To order memorial trees or send flowers to the family in memory of Mathew Varner, please visit our flower store.