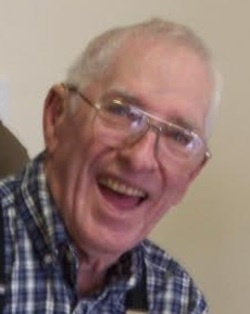 He was born July 2, 1925 to Henry Rochester and Rosseta Milliken in Lawrenceburg, Tennessee. On November 30, 1943, Melvin married Mary Asylee Kiser. He entered the US Army on December 14, 1944, where he served his country in WWII, he received an honorable discharge on August 6, 1946. He received the Expert Rifleman award. He & Asylee were blessed with 10 children: Melvin Junior (Miriam), Billy (Cathy), Marvin, Eugene (JoAnn), Brenda (Rick) Arens, Imogene (Derek) Carpenter, Jimmy, Patricia Pruett, Tony (Denise) and Lisa (Jim) Zielke, and many grandchildren, great-grandchildren and great-great grandchildren.

He retired from Bendix in 1987, was a member of the Bridgman American Legion Post #331 and the VFW Post #1137, Benton Harbor. He became a baptized member of St. Paul’s Lutheran Church, Stevensville, on July 2, 2005 at the age of 80. He enjoyed sharpening chain saw and lawnmower blades and repairing old lawnmowers. He also enjoyed the company of his good friends at the Legion.

To order memorial trees or send flowers to the family in memory of Melvin Milliken, please visit our flower store.