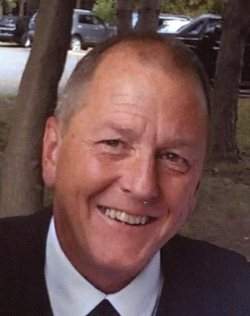 Michael Lee Harper, 57, of Stevensville, formerly of Watervliet, passed away on Monday, November 28, 2016 at his home.

Funeral services will be held 10 AM Thursday, December 1, 2016 at Saron Evangelical Lutheran Church, 510 Main Street, St. Joseph with Reverend Joan Oleson officiating. Burial will be in Hickory Bluff Cemetery, Stevensville. Friends may meet with the family on Wednesday from 5 - 7 PM at The Boyd Chapel of Pike Funeral and Cremation Services, 9191 Red Arrow Highway, Bridgman. As an expression of sympathy, memorial contributions may be given to the church.

Michael was born December 3, 1958 in St. Louis, Missouri the son of the late Frederick Lee and Virginia Elizabeth (Hudson) Harper. On August 22, 2015 he married Kristen Marie Granger. Michael was a United States Navy veteran. He worked at the Donald C. Cook Nuclear Plant for 24 years and then became the Planning Supervisor at Palisades Nuclear Plant in Covert. Michael was a hard worker who loved spending time with family and hosting parties. He was an avid sports fan and coach, and above all loved cheering for his hometown St. Louis Cardinals.

Michael was also preceded in death by siblings: Linda Harper and Christopher Harper.

To order memorial trees or send flowers to the family in memory of Michael Harper, please visit our flower store.