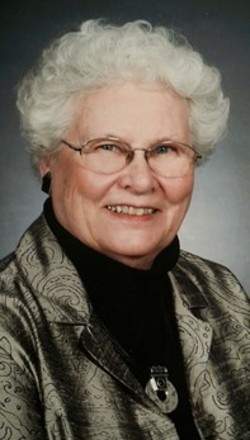 
Muriel Margaret Owen, 84 of Holland, formerly of St. Joseph, went to be with her Lord on Tuesday, January 6, 2015 at American House of Holland.

Memorial Services will be held 11 AM Friday at The Chapel, 4250 Washington Avenue, St. Joseph MI. In lieu of flowers memorial contributions may be made to Gentiva Hospice, Wyoming MI 49519.

Muriel was born December 27, 1930 in Detroit the daughter of the late Noel and Mable Muriel (Buchner) Burnham. On December 17, 1949 she married Frank William Owen. Muriel was always active in church wherever she lived including many years as a member of Woodland Shores Baptist Church, Bridgman. Over the years, Muriel was involved with music ministries, missions, the nursery, teaching Sunday School and vacation Bible school. She enjoyed sewing, crafts, reading and walks along the Great Lake Michigan. Before moving to Holland for heathcare and to be near family, she and Frank attended The Chapel in St. Joseph.

Muriel was preceded in death by two brothers David and Robert Burnham.

To order memorial trees or send flowers to the family in memory of Muriel Owen, please visit our flower store.