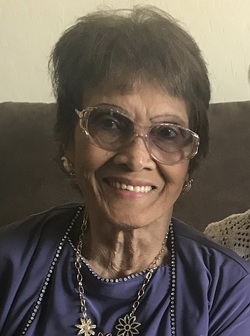 
Nelly G. Ramirez, 84, of Stevensville, passed away to join her soulmate, Alejandro, into eternal life on December 5, 2017.

A mass of Christian Burial will be held on Wednesday, December 13 at 11 am at St. Joseph Catholic Church, 211 Church Street, St. Joseph. Burial will be at Riverview Cemetery, St. Joseph immediately following the mass. Friends may meet with the family from 5-7 pm on Tuesday, December 12 at Pike Funeral and Cremation Services, The Boyd Chapel, 9191 Red Arrow Hwy., Bridgman. In lieu of flowers, donations may be made to the St. Joseph Catholic Church in her loving memory.

Nelly was born to the late Gorgonio and Tomasa Gonzalvo in Pitogo, Quezon Province, Philippines on March 17, 1933. She graduated from high school in the Philippines in 1950. She married her loving husband, Alejandro Ramirez on July 2, 1954 in Manila, Philippines. They immediately began to build their family with the birth of their first son, Larry in 1956 and continued until the birth of their 10th child, Jacquelyn in 1971.

She perfected the art of motherhood and homemaker for the last 61 years. She was passionate about raising her children to be educated, compassionate, loving individuals. She was selfless in giving all her time and energy to her family. Despite her 4 feet, 9 inches and 90 pound stature, her strength could rival that of 10 men. Even after raising her 9 children, she and Alejandro played an integral role in helping raise many of their grandchildren.

She found enjoyment in knitting, loved to collect coins, and was passionate about playing the Michigan Lottery. She was an avid Michigan Wolverine and Pittsburgh Steelers fan just as her late husband was. Not only were Nelly and her beloved able to enjoy the excitement of these teams together but their spiritual connection was beyond comprehension.

Nelly was preceded in death by her wonderful husband, parents, 5 siblings, and her son, Ferdinand.

To order memorial trees or send flowers to the family in memory of Nelly Ramirez, please visit our flower store.
Send a Sympathy Card