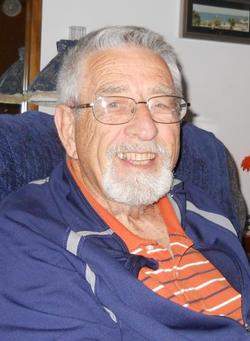 
Norman Dorgelo, 85, of Bridgman passed away on Monday, January 4, 2016 at Hanson Hospice Center in Stevensville.

A memorial service will be held 1 PM Friday, January 8, 2016 at Stevensville United Methodist Church, 5506 Ridge Road, Stevensville with Reverend David Hills officiating. Memorial contributions may be given to the church, or Hospice at Home, 4025 Health Park Lane, St. Joseph, MI 49085.

Norman was born January 12, 1930 in Holland, MI the son of the late Norman K. and Frances L. (Steketee) Dorgelo, Sr. He served in the US Navy. On December 11, 1952 he married Donna Ann Wagner and they shared 63 years together. Norman worked for Canteen and retired from Dolly Madison in South Bend. He enjoyed golfing and especially cheering for the Lakeshore Lancers. Norman was a member of the American Legion as well as the Stevensville United Methodist Church.

To order memorial trees or send flowers to the family in memory of Norman Dorgelo, please visit our flower store.