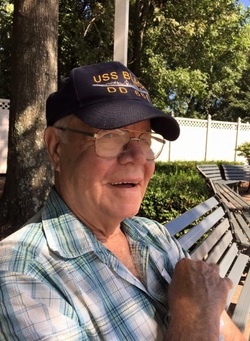 Friends may meet with the family on Saturday, December 17, 2016 from 2 - 4 PM at The Boyd Chapel of Pike Funeral and Cremation Services, 9191 Red Arrow Highway, Bridgman. A funeral and burial will follow in Heber Springs, Arkansas.

Oather was born September 30, 1932 in Floral, Arkansas, the son of the late Felix “Edd” and Jessie (MacMillan) Litaker. Oather served in the US Navy during the Korean Conflict on the Destroyer USS Black. On December 17, 1952 he married Betty Sue Johnson and she preceded him in death on March 17, 2011. Oather retired from Bendix Corporation, St. Joseph. He enjoyed golfing, hunting, fishing and spending time with his grandchildren.

Oather was also preceded in death by a daughter: Karen Sue Litaker in 2013, a brother: Jake Litaker and two sisters: Marie Conklin and Glenna Mae Litaker.

To order memorial trees or send flowers to the family in memory of Oather Litaker, please visit our flower store.