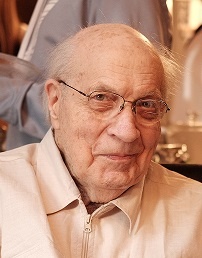 
Paul Frederick Klug, 91, of Buchanan, passed away on Friday, April 5, 2019 at Cartel Inns of Lakeland in St. Joseph.


Funeral service will be held at 11 AM on Friday, April 12, 2019 at Trinity Lutheran Church of Glendora,  1733 W. Glendora Road, Buchanan, Michigan 49107 with Reverend Jonathan Liebich officiating. Friends may meet with the family one hour prior to the time of the service at the church. Burial will be at Graceland Cemetery in Bridgman. Memorial contributions may be made to Trinity Lutheran Church of Glendora. Online condolences accepted at www.PikeFH.com


Paul was born Monday, February 27, 1928 in Buchanan, the son of the late August and Mary (Pintzke) Klug. Paul married Elsie Jane Landauer on May 4, 1959 who preceeded him in death August 2, 1988.  Much of his married life involved supporting and taking care of his wife who had multiple sclerosis. He was a proud and active member of Trinity Lutheran Church in Glendora, serving as treasurer for many years. Paul worked until retirement at Auto Specialties in St. Joseph. He and his companion, Ruth Retzke, were well known at many local restaurants enjoying many breakfasts and early dinners out. Paul particularly enjoyed fish sandwiches.


He was also preceded in death by his son Wayne Klug; and his brothers: Herman, Erwin, and Arnold.

To order memorial trees or send flowers to the family in memory of Paul Klug, please visit our flower store.