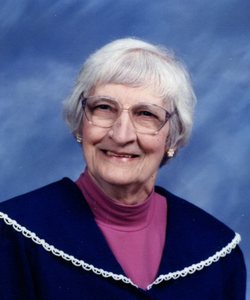 Pearl J. Schreiber, 93, of Sawyer passed away on Thursday, October 29, 2015 at The Hearth of Juday Creek in Granger, Indiana.

Mass of the Resurrection will be celebrated at 11 AM Monday, November 2, 2015 at Our Lady Queen of Peace Catholic Church, 3903 Lake Street, Bridgman, MI with Father Arthur Howard as celebrant. Visitation will be from 2 - 4 PM Sunday at Pike Funeral Home, Boyd Chapel, 9191 Red Arrow Highway, Bridgman.

Pearl was born on December 16, 1921 in Chicago, IL, to the late Arthur and Lida (Carberry) Schmidt. On October 7, 1944, in Portland, ME, she married Theodore Michael Schreiber, who preceded her in death on March 20, 1998. Pearl was a devoted wife to Theodore M. Schreiber, daughter, cousin, sister, mother, grandmother, and friend. She loved to quilt, sew, cook, bake, read, go to church, and watch old classic family TV shows and movies. Cheeseburgers, spaghetti, lasagna, veal parmigiana, and chocolate sundaes were her favorite food when frequenting restaurants for her birthday celebrations.

Pearl was also preceded in death by a brother - Leonard (Dorothy) Schmidt of Aurora, IL.

Mass of the Resurrection

To order memorial trees or send flowers to the family in memory of Pearl Schreiber, please visit our flower store.
Send a Sympathy Card