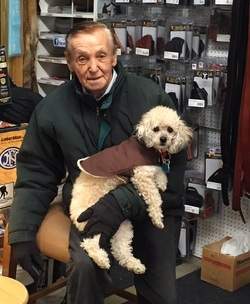 Cremation will take place and private family services will be held. In lieu of flowers memorial contributions in Ralph’s name may be made to the Baroda American Legion Post 345 or Support Our Troops Festival, PO Box 117, Baorda MI 49101.

Ralph was born June 11, 1923 in Bridgman the son of the late Frank and Margaret (Habel) Post. He was preceded in death by his wife Veronica (Oles) Post on August 16, 1984. Ralph was a US Navy veteran and proudly served his country for 38 ½ years. He flew fighter jets around the world, if it had wings, Ralph flew it. He owned and operated Post and Company Construction were he designed and build custom homes. Later he was a dedicated salesman for Jim Gilmore Cadillac in Kalamazoo and had the distinction of being in the top 5% of Cadillac salesman nationwide. Since 2000 Ralph worked hand in hand with his son Carle at the Gun & Bow Outpost in Baroda. He was an avid big game hunter and fulfilled a lifelong dream to hunt in Africa. Ralph loved his country and took pride and ownership in whatever was before him.

Ralph was also preceded in death by a brother, Ellan Post and a sister, Edith Percell.

To order memorial trees or send flowers to the family in memory of Ralph Post, please visit our flower store.