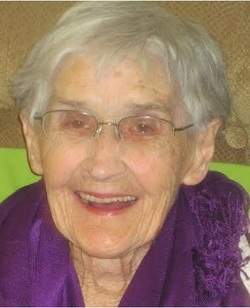 
Rayella Riske, 94, of Baroda passed away on Saturday, December 12, 2015 at Woodland Terrace of Longmeadow, Niles.

Funeral Services will be held at 11:00 AM on Tuesday, December 15, 2015 at St. John’s Evangelical Lutheran Church, 9193 Cleveland Avenue, Baroda with Reverend Bradley A. Ross officiating. Friends may meet with the family from 10 - 11 AM prior to the service at the church. In lieu of flowers, memorials may be given to Hospice at Home, 4025 Health Park Lane, St. Joseph MI 49085.

Rayella was born December 22, 1920 in Stevensville, the daughter of the late Raymond and Marie (Russell) Davis. On August 10, 1940 she married Robert Fred Riske, Sr. and he preceded her in death on December 4, 1967. While living in the Baroda area Rayella had been a member of Stevensville United Methodist Church. She spent the last 30 plus years in Florida near her sisters and recently returned to Michigan to be near her children.

Rayella was also preceded in death by a son, Robert Jr. On November 23, 2015 a grandson, Jay Zielke and a sister, Louise Ott.

To order memorial trees or send flowers to the family in memory of Rayella Riske, please visit our flower store.