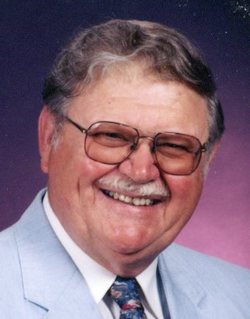 
Raymond Lester Spears, Jr., 85, of Buchanan went to be with his Lord and Savior on Friday, May 31, 2013 at Parkview Regional Medical Center in Fort Wayne, Indiana.

Funeral services will be held at 11 AM on Monday, June 3, 2013 at Trinity Lutheran Church, 5791 Sawyer Rd., Sawyer with Reverend Randy D. Lett officiating. Burial will be in Weesaw Township Cemetery, Buchanan. Friends may meet with the family from 2 - 5 PM on Sunday at Pike Funeral Home, Boyd Chapel, 9191 Red Arrow Highway, Bridgman. Memorial contributions may be given to Trinity Lutheran Church, PO Box 247, Sawyer, Michigan 49125.

Raymond was born January 10, 1928 in Michigan City, Indiana, the son of the late Raymond Lester Sr. and Marie Helen (Busick) Spears. On November 22, 1947 he married Leora Hischke and they shared 58 years together until her death in 2006. Raymond began working for the New York Central Railroad and then worked at Clark Equipment Company for 26 years, and retired from Bendix Allied Signal. Raymond enjoyed working with the Boy Scouts and seeing 5 of his grandsons become Eagle Scouts. Ray was a Merchant Marine serving from 1945-46.He loved to bowl, and also enjoyed the outdoors while camping and fishing.

To order memorial trees or send flowers to the family in memory of Raymond Spears, Jr, please visit our flower store.
Send a Sympathy Card