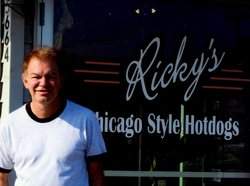 Cremation will take place and there are no services scheduled at this time. Memorial contributions may be made to the Humane Society of Southwestern Michigan, 641 S. Crystal Avenue, Benton Harbor, MI 49022.

Rick was born June 4, 1947 in Chicago, Illinois the only son of the late Richard and Eleanore (Amundsen) Kobler. He was a 1965 graduate of Oak Park - River Forest High School and earned a bachelor’s degree in Marketing from Western Illinois University. Rick along with his partner, Larry Mathews, owned and operated Ricky’s Chicago Style Hotdogs in Stevensville and had owned and operated Scarborough Faire Floral for more than 21 years in Chicago. Rick loved his cats, going to movies, spending time in his garden and walking along Lake Michigan.

Survivors include his companion and faithful friend, Larry Mathews and a dear friend, Eric Chernetski. Rick was preceded in death by his parents, Richard and Eleanore Kobler.

To order memorial trees or send flowers to the family in memory of Richard Kobler, please visit our flower store.