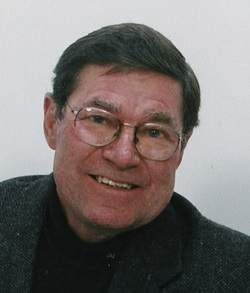 A memorial service will be held 7 PM Wednesday, November 8, 2017 at The Boyd Chapel of Pike Funeral and Cremation Services, 9191 Red Arrow Highway, Bridgman. Friends may meet with the family from 5-7 PM prior to the service at the funeral home. American Legion Post #434, 500 Grayton Road, Kingsford Heights, IN 46346 or Paws of Hope, PO Box 13, Stevensville, MI 49127.

He was born January 29, 1942 in Dayton, Ohio to Donald Russell and Anna Ruth Selby McGhee. Roger grew up in the Kingsford Heights, Indiana area and attended Union Township High School. In 1960 he enlisted in the U.S. Army and was stationed at Gelnhausen, Germany where he proudly served for three years. He has since been a member of the Kingsford Heights American Legion Post #434 for 51 years.

Roger retired from Oselka Marina, New Buffalo in 2012 where he had been the Parts Manager for almost 18 years and for more than ten years he operated The Gun Room in Sawyer.

Cars and family were his passions. He was a master auto body repairman, whose eye for detail, precision craftsmanship and relentless determination to make the restoration “better than factory” was well-known in this area. He was intuitive when it came to straightening frames and could make the corrections manually using simple tools.

He attended car shows and participated in countless shows with his own vehicles and earned many trophies. Roger was an avid NASCAR fan both in the stands and in front of the TV. He was an all-inclusive outdoors enthusiast and enjoyed ATVs, water sports, snowmobiling, fishing and hunting.

Roger is also survived by his mother, Anna Ruth Arndt and his siblings Connie Hutchison, Larry “Jay” (Phyllis McGhee), Donna (Andy Brown) all from the LaPorte, Indiana area and Kelly (Stephnie) McGhee of Arizona, seven nieces and nephews plus scores of extended family and friends. He was preceded in death by his father Donald Russell McGhee and infant daughter Pamela.

To order memorial trees or send flowers to the family in memory of Roger McGhee, please visit our flower store.