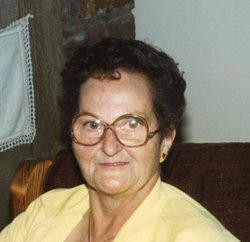 
Romona Marcella Stephens, 86, of Stevensville passed away on Thursday, February 18, 2016 at Pine Ridge Nursing Center in Stevensville. Cremation has taken place and the family will be remembering her privately.

Romona was born on November 30, 1929 in Bridgman, the daughter of the late Rudolph and Augusta (Hemming) Backus. Romona married Paul Stephens and he preceded her in death on January 19, 1992. She was born and raised in Bridgman. Romona was a member of Immanuel Lutheran Church in Bridgman. She was very hard working and most will remember her as a talented cook at Hyerdall’s Restaurant where she worked for many years. But Mona was a lucky woman who sometimes lived a lucky existence. As a nine year resident of Pine Ridge Nursing Center, Romona and her family will always be grateful for the care she received. During the last five years of her life, Mona had many people who helped her through this season of her life including her nieces Hope and Melinda.

Survivors include many nieces and nephews.

Romona was preceded in death by six brothers and sisters and her son Raymond.


A memorial service will be held at a later date.

To order memorial trees or send flowers to the family in memory of Romona Stephens, please visit our flower store.
Send a Sympathy Card