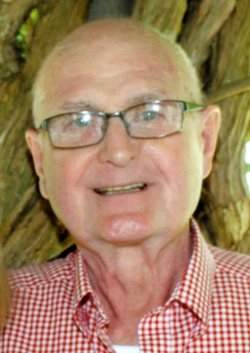 A funeral service will be held 11 AM Tuesday, December 6, 2016 at Immanuel Lutheran Church, 9650 N. Church Street, Bridgman with Reverend Thomas Brazinsky officiating. Friends may meet with the family 5 - 7 PM Monday, at the Boyd Chapel of Pike Funeral and Cremation Services, 9191 Red Arrow Hwy, Bridgman. Burial will be in Graceland Cemetery, Bridgman. As an expression of sympathy memorial contributions may be given to Immanuel Lutheran Church, PO Box 26, Bridgman, MI 49106. Online condolences accepted at www.PikeFH.com

Ron was born November 22, 1931 in Chicago, the son of the late Edward J. and Alma (Schultz) Germain. After graduating Bridgman High School in 1949 Ron served his country in Germany in the United States Army. On March 13, 1965 he married Alice Eleanor Schaffer. Ron oversaw the family business, Bowling Green County Club in Bridgman and retired from Indiana Michigan Power where he worked as a welder at the DC Cook Plant. Ron was a part of the Lake Township Fire Department and ambulance crew for many years and had served as the township Treasurer for 18 years.

To order memorial trees or send flowers to the family in memory of Ronald Germain, please visit our flower store.