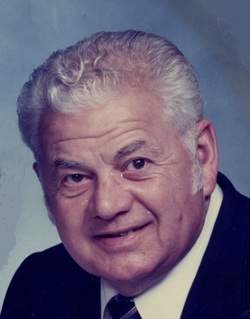 A Celebration of Life Service will be held 11 AM Tuesday, July 14, at Pike Funeral Home, Boyd Chapel, 9191 Red Arrow Hwy, Bridgman. Burial will be in Ruggles Cemetery, Baroda. Friends may meet with the family from 5-7 PM Monday at the funeral home. As an expression of sympathy, memorial contributions may be given to the Village of Baroda Parks Fund. PO Box 54, Baroda MI 49101.

Ron was born November 9, 1923, to the late Robert and June (Hendrix) Miller. He grew up in his beloved Baroda, later graduating from Battle Creek Central High School and attended Michigan State University. He was a World War II Navy Veteran, proudly serving on a submarine in the Pacific with fortunate safe assignments spying and alluding the Japanese from Alaska to Bora Bora. On March 29, 1946 he married Berniece M. Schiebel. She was the love of his life, a constant companion. Together the greatly enjoyed their immediate and extended family, spending winters in Florida, where they had a terrific circle of friends, including many fun vacations with loved ones. They especially enjoyed visiting their grandsons in Texas. They were loyal fans and proud supporters of their grand daughters’ Lakeshore sports teams, attending their collegiate games all over the U.S. and Europe as well.

Professionally, Ron started out at Whirlpool as an electrician, went on to manage of Schultz Industrial Supply, and later, established his own locksmith business, Miller Lock & Key Service. He had an incredible gift of helping other, took compassionate care of his customers, and pride in the success of his business. He enjoyed his work so much, Ron was 88 years old when he retired. It was no more trouble for him to give his warm friendly smile with a twinkle in his eye, than it was for a bird to sing. He lead a full and balanced life, making time for his community as Ron served many decades on the Baroda Village Council and as a trustee on the Board of Directors for the Baroda Bible Church.

An ardent sportsman, he enjoyed the camaraderie of baseball, basketball, fishing, hunting and particularly golf. Ron cherished Wednesdays, participating in the Pebblewood Golf League for 70 delightful years. The lively competition, the good time, and the friendships forged brought great pleasure to his life. He was an avid reader, cribbage player, and long-serving member of his close-knit group of card playing friends, affectionately referred to as “The Garden Club.” Altogether, a wonderful friend, son, brother, husband, father and grandfather, Ron will be fondly remembered by many with love and affection.

To order memorial trees or send flowers to the family in memory of Ronald Miller, please visit our flower store.