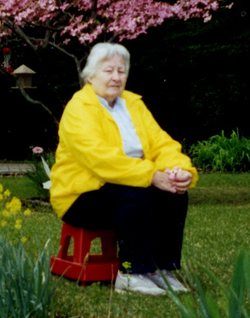 A graveside service will be held 4 PM Friday, July 25, 2014 at Graceland Cemetery, Bridgman. As an expression of sympathy, memorial contributions may be given to Hospice at Home, 4025 Health Park Lane, Saint Joseph, MI 49085.

Rose was born January 17, 1928 in Little Rock, Arkansas the daughter of the late Garvis and Flonie (Yarbrough) Freeman. On August 21, 1945 she married Guy Wilson and he preceded her in death on March 5, 2005. Rose had been employed at Victor-Miller Corp. in Benton Harbor for many years. She loved to flower garden, sew and crafting. During their retirement years they traveled around the country in their motorhome. A private pilot, she had flown several missions as a 1st Lt. of the Civil Air Patrol.

Rose was also preceded in death by a daughter, Martha Helfman in 2012 and a sister, Verna Potts.

To order memorial trees or send flowers to the family in memory of Rose Wilson, please visit our flower store.
Send a Sympathy Card