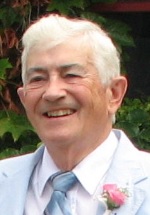 Rev. Russell Thomas Panico, Sr., 87, of Three Oaks entered into the presence of his Lord and Savior Jesus Christ on Saturday, March 27, 2021.

Russell was born on August 7, 1933 in Hicksville, OH to the late James and Mary Elizabeth (Everett) Panico. He was raised by his foster parents, Norbert (Bill) and Myrtle Everett of Hicksville, OH. He married Kathryn Ann Turney on June 28, 1959 in South Bend, IN at
Portage Methodist Church.

Russell was born again on June 1, 1952. After answering to his call to the Ministry, he graduated and received his B.A. degree in Sociology and minored in Art from Bluffton Mennonite College, Bluffton, OH. He also attended Bowling Green State University, Moody Bible Institute, Methodist Theological Seminary. He was ordained on July 5, 1974 by Rev. Dr. Keith M. Williams and the Evangelical Church Alliance in Watertown, South Dakota at the Midwest Bible Camp and Conference. He had served as a circuit Pastor beginning in 1965 and served at several Churches in Northwest Ohio. In 1975, he pastored in Wisconsin at a Mission Church for six months and then accepted the pastorate of Olivet Congregational Church, Independent, Bridgman, MI until he retired in 2013. He served 50 years as a Pastor sharing the Gospel of Jesus Christ. He is also retired from Heath Company in St. Joseph, MI where he was an Off-Set Printer.

Russell had many hobbies. Reading, Geography (he always had a map in his pocket), Gardening, H-O Scale Trains, Canoeing, Fishing, Camping, Big-Game/Deer Hunting, Reloading Ammunition, Acting, Art and Photography. He dearly loved his Horses, Cats and Dogs. He enjoyed reading Sermons of Moody, Spurgeon, Wesley, Whitefield, and many other sages of the Christian Church.

To order memorial trees or send flowers to the family in memory of Russell Panico Sr., please visit our flower store.
Send a Sympathy Card