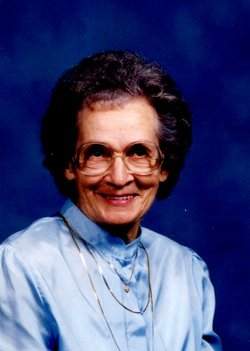 A funeral service will be held 11:00 AM Wednesday, January 7, 2015 at Zion United Church of Christ, 9100 Church Street, Baroda, with Reverend Christopher Noffke officiating. Friends may meet with the family from 5 - 7 PM Tuesday at Pike Funeral Home, Boyd Chapel, 9191 Red Arrow Highway, Bridgman. Burial will be at Graceland Cemetery in Bridgman. Memorial contributions may be given to Zion United Church of Christ, PO Box 10, Baroda, MI 49101 or The Humane Society of SW Michigan, 641 S. Crystal, Benton Harbor, MI 49022.

Ruth was born August 30, 1921 in Bridgman, the daughter of the late Adolph and Bertha (Letke) Busse, Sr. On June 3, 1930 Ruth married Theodore Dinges who preceded her in death on February 16, 1990. Ruth worked for Strefling Oil Company. She and Ted also farmed vineyards and supplied grapes to Welches. Ruth was a faithful member of Zion United Church of Christ in Baroda.

Ruth was also preceded in death by a daughter: Karen in 2008; a brother: Adolph Busse, Jr.; and sisters: Frieda Strefling and Anna Kaschube.

To order memorial trees or send flowers to the family in memory of Ruth Dinges, please visit our flower store.