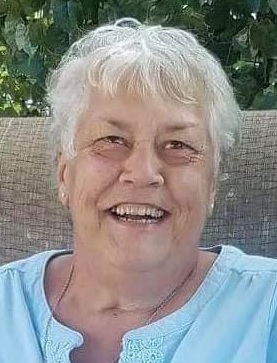 Sally Faye (Soard) Schwerha, 71, of Bridgman, Michigan, passed away at Lakeland Hospital in St. Joseph, Michigan on June 2, 2020 after battling pancreatic cancer for two and a half years. Her beloved husband was by her side.

Mass of Christian Burial will be held at 10:00 AM Saturday, June 6, 2020 at Our Lady Queen of Peace Catholic Church, (mask required) 3903 Lake Street, Bridgman with Reverend Father Arthur Howard officiating.  Friends may meet with the family at church from 9-9:45 am prior to the service. Memorial contributions may be given to St. Jude Children’s Research Hospital or Wounded Warrior Project. Online condolences accepted at www.PikeFH.com

Sally was born April 12, 1949 in Kewanee, Illinois to Leslie and JoAnn (Brush) Soard. At age 12, the family moved to Elkhart, Indiana where she graduated from Elkhart High School in 1967. Ten days later, on June 17, 1967, she married the love of her life, John (Jack/Toad) Schwerha, with whom she enjoyed nearly 53 years of marriage. Their life together took them from naval bases in New London, CT and Hampton Roads, Virginia, homes in LaPorte, IN and Baroda, MI, and finally to Bridgman, where she has resided since 1979.

Sally started her college career in 1978, taking night classes while working full-time and raising her busy family alongside Jack. In 1986, she earned an Associate Degree in Business Administration from Lake Michigan College, followed by a BA in Business Administration from Siena Heights College in 1988. Sally’s work career included the Purchasing Dept. at Clark Equipment Co.; Director of Continuing Education at Lake Michigan College; and finally as Human Resources Manager at Bosch Manufacturing in Bridgman, from which she retired in December 2005. After retirement, she pursued her love of quilting, creating beautiful blankets for friends and family across the country and even total strangers who were in need of their love and warmth while undergoing chemotherapy treatments.

In their retirement, Sally and Jack travelled throughout the United States and the world, including multiple cross-country US trips, cruises to Australian, Hawaiian, Caribbean, and European ports, and many, many trips to visit her cherished grandson who adored his “YaYa”.

To order memorial trees or send flowers to the family in memory of Sally Schwerha, please visit our flower store.
Send a Sympathy Card