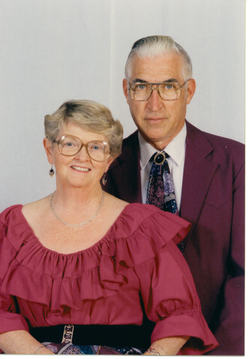 Shirley was born September 7, 1927 in Muskego, Wisconsin, the daughter of the late Sidney and Armetta (Lee) Martin. She graduated from Mukwonago High School in 1945. During the family years Shirley worked in the beauty industry and went on to be a beauty salon inspector for the State of Wisconsin. Later she return to college and received her first bachelor’s degree in 1982 at the age of 55. She continued her education at the University of South Florida earning her master’s degree. After graduating she joined Joseph Callan LCSW in private practice, University Psychotherapy Group. She served as president of the USF Social Work Society from 1990- 1992, retiring at the age of 80. Working with children and adults with emotional and social needs was her greatest passion.

On August 21, 1947 she married Gordon Winkelman and together raised their two daughters Terry Lynn and Linda Jean. Shirley had a love for square dancing where she met Robert Barnes and they were married on July 4, 1992 in Sebring Florida, during one of their many square dance weekends together.

Shirley taught round dancing with Bob from 1992 to 2010 when they both retired from teaching. During this time they taught through the Eastern United States, United Kingdom, and throughout Europe. They also did extensive traveling and led cruise line tours where they taught the art of both square and round dancing. Shirley was an accomplished dancer who also enjoyed passing on her love of dance to others. Shirley and Robert enjoyed their travels and made their home in Zephyrhills, Florida before moving to Buchanan in 2011.

Shirley was also preceded in death by her daughter, Linda.

To order memorial trees or send flowers to the family in memory of Shirley Myers, please visit our flower store.
Send a Sympathy Card