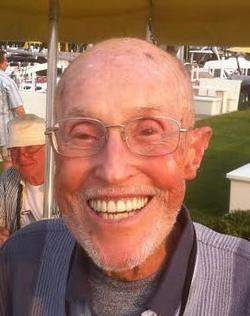 Stephen was born August 7, 1921 in Chicago, Illinois, the only son of the late Stephen M. and Anna (Blink) Slager. On September 14, 1966 Stephen married Maxine Goff. He was a recipient of the Silver Star and Purple Heart from the United States Army during WWII where he was a radio operator. He was a graduate of the University of Miami, and owned and operated Trico Graphics in Chicago, Ill. He was a past Commodore of The Lake Michigan Yacht Club and has been a boater since his teens. Steve loved the high sea adventure of Lake Michigan in summer and high terrain snow skiing in winter. Steve will be remembered for his broad smile and upbeat attitude.

A memorial service will be held at 2:00 PM, Monday, August 25, 2014 at The Episcopal Church of the Mediator, 14280 Red Arrow Highway, Harbert, with Reverend Paula Durren officiating. Memorial contributions may be given to Hospice of St. Frances, 1250 Grumman Place, Titusville, Florida 32780.

To order memorial trees or send flowers to the family in memory of Stephen Slager, please visit our flower store.