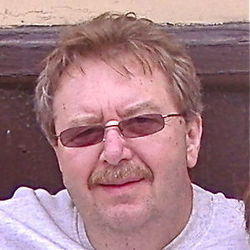 
Steven Henry Mutz, 63, of Macomb formerly of Bridgman, passed away suddenly at home on May 4, 2014.

Steve was born September 27, 1950 to Henry and Mildred (nee Reck) Mutz in Bridgman, Michigan, the younger of two boys. Steve grew up in Bridgman, living near Chicago would account for his early support of the Chicago teams. After high school, Steve went to college for a year and then got in his car, drove east to the Detroit area where he remained the rest of his life. At that point he switched his loyalty to the Detroit sport teams, all except for the Bears.

Steve found his career in construction, specifically, quality control. He was part of the team that built the People Mover. He met his lovely wife, Linda (nee Karam), while on that project. They both worked in the same office building, on different floors, and passed each other in the lobby. Eventually they started dating which led to their marriage on November 26, 1988 at St. Sharbel Church in Warren, Michigan. After retirement, Steve and Linda frequently traveled, visiting friends in Colorado and Texas.

Steve is survived by his wife, Linda and his brother, David of Bridgman; his sister-in-law Barbara O'Connor, brother-in-laws Michael (JoAnn) and John (Rose) Karam, a special uncle Ervin Reck, many nieces, nephews and cousins. He was predeceased by his parents. Steve was a very kind man and will be missed by all.

To order memorial trees or send flowers to the family in memory of Steven Mutz, please visit our flower store.
Send a Sympathy Card