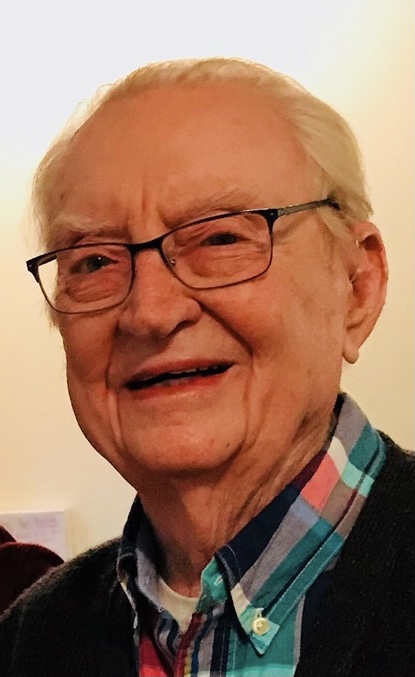 VanNess Howard Simmons, 98, died on Friday, March 12, 2021, in the care of his family at his home in Harbert, Michigan, near the dunes and lake he dearly loved. ﻿The family invites you to celebrate VanNess Simmons and his life in a service at the Harbert Community Church in Sawyer on Saturday, June 18, 2022, at 2pm eastern time.  We will share stories and memories informally in the Fellowship Hall, immediately following the Service.  Online condolences accepted at www.PikeFH.com.

A World War II Navy veteran, he served as an operating room technician with the Navy Hospital Corps at Pearl Harbor in 1945.  He graduated from the University of Dubuque in Dubuque, Iowa in 1947.  He had been student council president and the president of the Phi Omicron fraternity.  It was in Dubuque that Van met the love of his life, Dorothy Mae, in a summer theatre production. After a long courtship and a wartime separation, they married in 1946 following his discharge from the Navy.  This year they would have celebrated their 75th Anniversary.

An active business community leader for 25 years in Chicago, Van was the owner of Simmons Flower Shop and Greenhouses.  He excelled as a gifted grower and creative floral designer, and was much sought after for his inspired large-scale decorations for holidays, special events and graduations.  In addition to his family run floral business, Van worked for the Chicago Fire Department. He retired from the Fire Department in 1989, after serving 23 years.

Van continued his life of service and commitment to others through an active involvement with several volunteer service organizations. He was President of the Ravenswood Kiwanis Club, a member of the Elks Club, and Master of the Masonic Blue Lodge, 32nd Degree Mason.  He was also a member of the Shriners’ Medinah Patrol Close Order Drill Team and Commander of the Lincoln Park Grand Commandry.

With a keen interest in history, Van traced his ancestry to early New England settlements and the American Revolution.  He and Dorothy loved music and dancing and for many years, made a great couple on the dance floor, no matter if it was ballroom or square dancing.  A Boy Scout and Cub Scout Master, Van lived by the code of always doing one’s best.  A kind and loving man, Van was known for his willingness to offer a helping hand to those in need. Van was blessed with a long and full life and will be remembered by all those many individuals whose lives he touched.

To order memorial trees or send flowers to the family in memory of VanNess Simmons, please visit our flower store.
Send a Sympathy Card