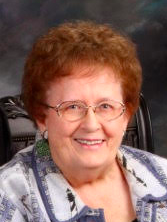 A memorial service will be held at 3:00 pm, Saturday, November 16, 2019, at The Chapel, 4250 Washington Avenue, St. Joseph, MI with Reverend Phil Bubar officiating. The burial will be in St. Paul Osage Cemetery in Otoe County, in Cook, Nebraska. Memorial gifts may be given to either The Chapel in St. Joseph, MI (www.yourplacetobelong.com) or Five Pines Ministries in Berrien Center, MI (www.fivepines.org). Online condolences can be posted at www.PikeFH.com.

Virginia was born on February 23, 1929, in Oak Hill, West Virginia. She was the daughter of the late Thomas V. Hutchison and Dalma Lillian (Saunders) Hutchison, and she was the younger sister of the late Betty Jo (Hutchison) French. She graduated from high school in Beckley, West Virginia, and later from college at Wheaton College in Illinois, where she studied to become a nurse.

While at Wheaton College, Virginia met Orland H. “Mitt“ Mittelberg, and they were married on June 27, 1952 in Beckley, West Virginia. Their romance flourished through 67 years of faithful partnership. Virginia is survived by Orland, along with their four children: Lisa (Phil) Bubar of St. Joseph, Michigan; Kathy (Jim) Postlethwaite of Calgary, Alberta; Mark (Heidi) Mittelberg of Larkspur, Colorado; Gary (Cassandra) Mittelberg of La Cañada, California; and by 14 grandchildren and 10 great-grandchildren. Over the years they lived in West Virginia, Ohio, Nebraska, and North Dakota (where they stayed for 46 years)—along with several winters in Mesa, Arizona—all before coming to the retirement community in Bridgman, Michigan. They also loved to travel in Orland’s beloved “Mitt-Mobile” conversion van, and drove through most of our 50 states as well as several Canadian provinces.

Ginny, as she was known by family and friends, served as a registered nurse before becoming a wife and mother. She was characterized by her consistent and loving walk with Jesus, as well as her gentle and sweet presence around everyone who knew her. She lovingly served others without the need for attention or credit—though when she engaged in her frequent table games she was known as a fierce competitor, and she had an uncanny penchant for winning at Bingo during her time at Woodland Terrace! She was also a member of The Chapel in St. Joseph, Michigan.

To order memorial trees or send flowers to the family in memory of Virginia "Ginny" Mittelberg, please visit our flower store.
Send a Sympathy Card