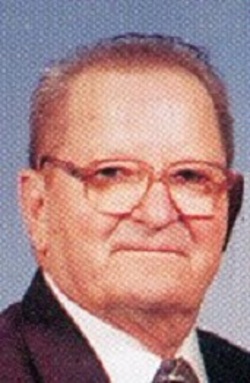 
Walter A. Freyer, 91, of Sawyer passed away peacefully on Wednesday morning, December 3, 2014 at Country Manor Care Center in Bridgman. Funeral services will be held 11 AM Saturday, December 6, 2014 at Trinity Lutheran Church, 5791 Sawyer Road, Sawyer, with Reverend Randy D. Lett officiating. Visitation will be on Friday from 1 - 3 PM at Pike Funeral Home, Boyd Chapel, 9191 Red Arrow Highway, Bridgman. Burial will be in Riverside Cemetery, Three Oaks. As an expression of sympathy, memorial contributions may be given to Trinity Lutheran Church, PO Box 247, Sawyer, MI 49125.

Walter was born August 10, 1923 in Bridgman the son of the late Alexander and Edna (Hischke) Freyer. On January 17, 1945 Walter married Virginia Lorraine Krieger. He served in the US Army during WWII. Walt was an active member of the Trinity Lutheran Church in Sawyer. He was a volunteer Fire Fighter of Sawyer Fire Department for 35 years and a member of the New Troy American Legion Post 518. Walt retired from Bendix in St. Joseph. He enjoyed traveling to Arizona and Florida; hunting and fishing trips to Canada and Ohio; and camping up north with his children and grandchildren.

Walter was preceded in death by four brothers and one sister - Ted, Lyle, Bob, Irv and Margaret.

To order memorial trees or send flowers to the family in memory of Walter Freyer, please visit our flower store.
Send a Sympathy Card