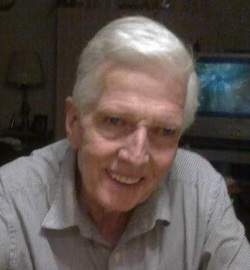 
Walter Sembach, age 75 of Buchanan passed away on Tuesday, December 20, 2016 at Lakeland Hospital in Niles from complications of CHF and sepsis. Walters family is grateful for the care he received from Great Lakes Caring Hospice since August, 2016.

A memorial service will be announced later. As an expression of sympathy memorial contributions may be given to the family to assist with expenses or to Trinity Evangelical Lutheran Church, 5791 Sawyer Rd, Sawyer, MI 49125.

Walter was born June 30, 1941 in Philadelphia, Pennsylvania, the son of the late Martin Sembach and Mallette Holden. He never married and worked in construction and pest control most of his life. Walt enjoyed life and there was never anything he could not fix from cars, small electrical appliances, to his favorite, coffee makers. He loved to go blueberry picking back in Pennsylvania, but certainly loved Michigan’s berries too .His favorite past time was watching any and all programs on the Discovery Channel about UFO’s, and or alien life and believed they were among us every day.

To order memorial trees or send flowers to the family in memory of Walter Sembach, please visit our flower store.