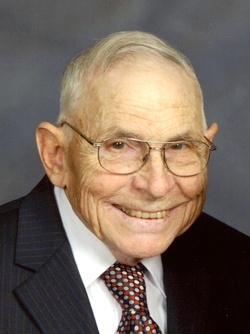 
Ward Shuler, 88 of Baroda passed away Monday, March 9, 2015 at his home surrounded by his family.

A memorial services will be held 10 AM Saturday, March 14, 2015 at Lake Township Hall, 3220 Shawnee Road, Bridgman. Memorial contributions may be given to Berrien County Youth Fair, 9122 US Highway 31, Berrien Springs, MI 49103. Online condolences accepted at www.PikeFH.com

Ward was born January 22, 1927 in Baroda the son of the late Grover and Olive Mae (Stanard) Shuler. Ward took his first and last breath in the same room 88 years and 45 days later. He is probably playing third base for the Landon School this afternoon. He started playing in 4th grade and was a County All Star on the team that won the county championship. He would like to have become a veterinarian but because his father was ill, he decided to come back to the farm after he got out of the Merchant Marines. He sailed for two years during WWII and had a lifetime of experiences. After sailing he farmed with his brother Wade. Together they had one of the top producing herds of registered Holsteins in the country. They bred many State and National production leaders in the 60's and 70's. He was a member of the Holstein Association and Michigan Farm Bereau. He was on the FSA county committee and a 4H leader. He and his brother won the Ford Farm Efficiency Award for Dairy which culminated with a trip to Los Angeles and Disney Land in 1968. He loved to visit relatives in California, Seattle, Florida and his great sailing buddy from Maine. He was a member of Zion United Church of Christ, Baroda. He considered his brothers’ and sister’s families just like his own. His’s great nephew and great nieces; Allen, Karen, Elaine were more like his grandkids.

Ward was preceded in death by two brothers - Wade and Woodrow Shuler and a son-in-law - Robert VerDuin.

To order memorial trees or send flowers to the family in memory of Ward Shuler, please visit our flower store.