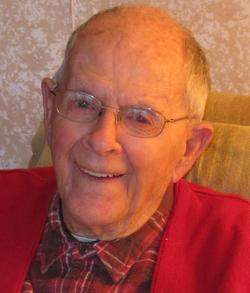 Funeral services will be held 11:00 AM Wednesday, April 9, 2014 at Harbert Community Church, 6444 Harbert Road, Harbert, MI., with Reverend Jay Fast officiating. Friends may meet with the family on Tuesday from 5-7 PM at Pike Funeral Home, Boyd Chapel, 9191 Red Arrow Hwy., Bridgman. Burial will be in Oak Grove Cemetery, LaPorte County, IN. As an expression of sympathy, memorial contributions may be given to Hospice at Home, 4025 Health Park Ln, St Joseph, MI 49085 or Harbert Community Church, 6444 Harbert Road, Harbert, MI 49115.

Jack was born August 16, 1918 in Hobart, Indiana the son of the late John and Golda (Hastings) Fuller. On June 3, 1942 he married Bette Jean Watson and she preceded him in death on December 22, 2010. Jack was a WWII US Army veteran serving in both the European and Pacific theaters. Together with Bette in 1951 they started Jack & Jo’s Variety Store in Rolling Prairie, IN., and in 1955 moved to Bridgman where they owned and operated the Ben Franklin Store for the next 28 years. Jack was a life-long fan of traditional jazz. He took his family across the country to attend jazz fests, distributing copies of his CD recordings of traditional jazz. His life mantra became “every day each life should include a laugh, a hug, and a bit of jazz.”

Jack was also preceded in death by a daughter - Betty Gilmore in 2006; and his brother, Ted Fuller.