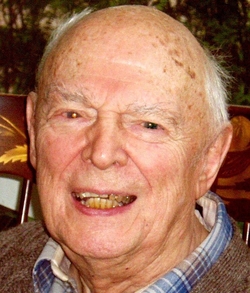 
William L. Rittschof passed away May 12, 2013 at the Woodland Terrace, Bridgman, Michigan, at the age of 98. Bill's life will be commemorated at his home in New Buffalo later this summer. Donations may be made to the wonderfully supportive Hospice at Home in St. Joseph, 4025 Health Park Lane, St. Joseph, MI 49085.

Bill was born May 4, 1915 in Chicago, the son of William and Margaret (Ohlson) Rittschof. He met his beloved wife Muriel (1916 - 2004) while both attended the University of Chicago, where Bill earned his Masters Degree in Chemistry. They married shortly after their graduation, remaining each other's “spark” for the next 60+ years.

Bill was a chemist for Standard of Indiana and Engelhard, and played a key civilian role during WWII. A man with many interests (canoeing, fishing, classical music, science of all flavors …), he'll be most remembered as a loyal friend and gentleman.


A memorial service will be held at a later date.

To order memorial trees or send flowers to the family in memory of William Rittschof, please visit our flower store.
Send a Sympathy Card