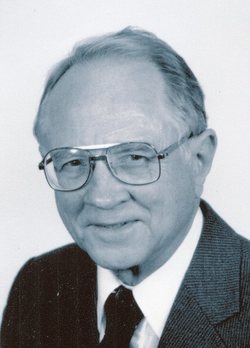 
Dr. William “Bill” E. Schlender, 95, of Sawyer, passed away on Tuesday, January 19, 2016 at Woodland Terrace after a lifetime of loving education and enjoying all of the experiences associated with it.

A funeral service will be held at 10 AM Friday, January 22, 2016 at Trinity Evangelical Lutheran Church, 5791 Sawyer Road, Sawyer, with Reverend Randy D. Lett officiating. Friends may meet with the family from 5 -7 PM Thursday at Pike Funeral Home, Boyd Chapel, 9191 Red Arrow Highway, Bridgman, MI. Burial will be in Riverside Cemetery. In lieu of flowers, memorials may be made to the church, PO Box 247, Sawyer, MI 49125 or Lakeshore Rotary, PO Box 25, Stevensville, MI 49127.

Bill was born October 28, 1920, in Sawyer to the late Gustav and Marie Schlender. A graduate of Valparaiso University in 1941, he earned an MBA from the University of Denver in 1947. From 1943 - 1945, Bill served in the United States Army Sixth Infantry Division. In 1955, he earned his Ph.D. from Ohio State University. Throughout his 39 years in academia, he earned the respect and admiration of faculty members, staff and students, and the community. Bill was beloved by his family and many friends who were all immensely proud of him and his many achievements.

Bill was active in many civic affairs and served on a variety of boards, councils, committees, associations, clubs and societies. He also worked as a consultant to business firms and government agencies. He especially enjoyed his relationship with the Lakeshore Rotary Club. Bill spent most of his retirement years at the family homestead in Sawyer, with his wife Peggy, who preceded him in death March 2013. Though they wintered in Sun City, Arizona, it was the Sawyer home that gave them so much joy together.

He is survived by sixteen nieces and nephews, along with many life-long friends across the states and around the globe. Many will remember him as a man who worked hard, lived well, and kept learning all of his life.

To order memorial trees or send flowers to the family in memory of William Schlender, please visit our flower store.
Send a Sympathy Card