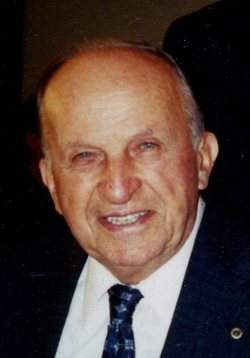 William A. Vorel, 99, of Bridgman passed away on Sunday, July 23, 2017 at Cedar Lake Assisted Living in Lake Zurich, Illinois.

Graveside services will be held 11 AM Wednesday, July 26, 2017 at Graceland Cemetery, 8350 Red Arrow Highway, Bridgman. Friends may meet with the family from 10 am until the time of the graveside service at The Boyd Chapel of Pike Funeral and Cremation Services, 9191 Red Arrow Hwy, Bridgman, MI. Memorial contributions may be sent to JourneyCare, 2050 Claire Court, Glenview, Illinois 60025 or online at journeycare.org.

William was born August 6, 1917 in Chicago, Illinois the son of the late Joseph and Jenny (Novotny) Vorel. On April 6, 1946, he married Marjorie J. Schlittler and she preceded him in death on July 28, 2004. While in the army Bill was a soldier in the 32nd Division, 127th Infantry, stationed in North Africa and Italy. He was also an engineer in the 107th Engineering Outfit working in construction and other odd jobs. In 2013, William moved to Lake Zurich to be near his son.

Survivors include his son: William “Terry” (Susan Nielsen) Vorel. He was also preceded in death by two brothers and two sisters.


Memorial Donations Memorial donations can be made to:
JourneyCare, 2050 Claire Court, Glenview, IL 60025 or www.journeycare.org

To order memorial trees or send flowers to the family in memory of William Vorel, please visit our flower store.