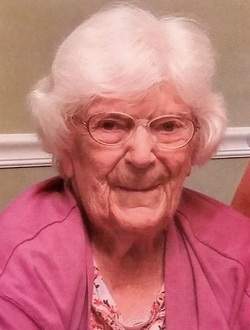 Winifred Mary Emerick, 96, of St. Joseph and Bridgman, formerly of Allegan passed away on Monday, October 16, 2017.

Winifred was born Monday, July 4, 1921 in Allegan, the daughter of Truman and Anna (Davis) Dodge. She married Donald Emerick who preceded her in death. Winifred was a farmer’s wife and lived in Allegan until Donald’s death. She moved to St. Joseph to be nearer her family.

Winifred was also preceded in death by two brothers and a sister.

To order memorial trees or send flowers to the family in memory of Winifred Emerick, please visit our flower store.